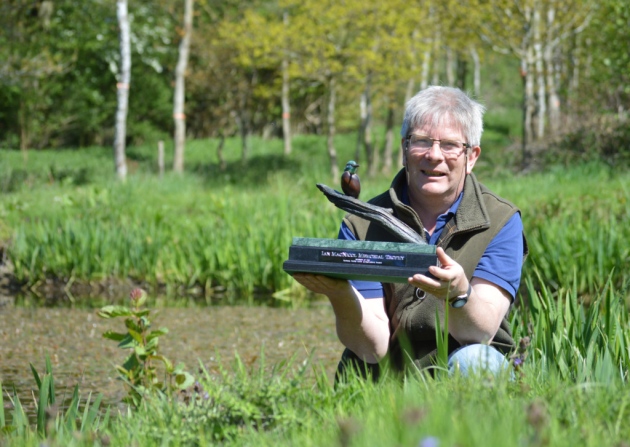 The transformation of a Norfolk farm from an environmental disaster into a profitable wildlife haven should inspire other farmers to embrace conservation, says its owner – if not for the funding, then for the enjoyment of nature.

When Charles Inglis’ family first arrived at Hole Farm in 1982, it was a windswept prairie – bereft of trees, hedgerows and wildlife.

Today, that scene is a distant memory.

The huge open fields have made way for a mosaic of insect-rich hedgerows and woodland, around arable crops fringed with floristic margins and wild birdseed plots, and dotted with 14 new ponds which are teeming with tadpoles and water boatmen.

This transformation has brought the Ian MacNicol Memorial Trophy to the farm, awarded by Norfolk FWAG (Farming and Wildlife Advisory Group) to celebrate the best conservation within the county’s agricultural businesses.

And it illustrates the determination of Mr Inglis to continue the work of his father-in-law Robin Carver, who began the daunting task of bringing life back to the land at Hempstead, near Holt, in the 1980s.

Mr Inglis took over the management of the 270-hectare farm in 2010 and many of its environmental features are funded under a Higher Level Stewardship (HLS) agreement which provided new habitats and food sources – sparking a population explosion in insect life.

A Game and Wildlife Conservation Trust study last year found 759 beetles, from 25 different species, in a floristic margin and 934 from 26 species in a cultivated margin – including two nationally-scarce beetles.

Mr Inglis’ own research has identified 23 species of butterfly on the farm, including the purple hairstreak and white admiral.

It has all been motivated by a drive to make both the arable land and the environment more productive – a far cry from the days when the exposed fields were suffering soil erosion at a rate of 150 cubic metres per hectare, per year, according to research by the University of East Anglia.

“I am proud of what we are doing here, and I would like people to know that it can be done,” said Mr Inglis. “You can change a landscape in a lifetime.

“There are people who are improvers, people who are maintainers, and people who don’t give a monkeys. I would say I am an improver. I am always looking to see how we can do things better. A lot of it is self-motivation, so how you instil that into someone who is not motivated that way is a difficult question.

“Part of it has got to be the enjoyment factor. I would have thought very seriously about whether I would want to live in that house in 1982, in that landscape. But this is a fabulous place to live now, and the rewards are there for all to see.”

Mr Inglis came into farming following a career in the oil industry, but said he had “always loved wildlife”.

“I am worried about what is going on in the countryside,” he said. “I think it is people like us who notice that all is not well. I am very conscious that fly and insect life is suffering in most parts of the world. It really does need attention. But I think what we have here is a good news story. These floristic margins are absolutely buzzing with insect life and it is obviously crawling with beetles.”

He said the farm’s approach was to maximise the yields from the centre of the fields, and to compensate that by “working very hard at making the margins, field corners and unproductive areas work for wildlife.” That has included planting nine miles of hedgerows and digging 14 new ponds.

There are also now 35 compartments of forestry within 168 acres of woodland, ranging from plantations of cricket bat willow, black walnut and chestnut to the historic woods protected as a SSSI (site of special scientific interest) at Edgefield Little Wood.

The farm’s HLS agreement runs out in 2022 – when the policy landscape for environmental funding could be very different after Brexit.

“It is very difficult to get a good picture of where these schemes are going,” said Mr Inglis. “There is talk about it being paid on results, which on one hand should favour farms like ourselves. But what I don’t know is if someone is already doing it well, then it may be difficult to show an improvement. There is also talk that there will be less money to go round so it will be much more targeted.

“We have tried to be one of the best, because I would like to think the taxpayer is getting good value for money here. For every pound we spend we are producing a lot of wildlife.”

Mike Edwards, business manager for Norfolk FWAG, said: “The work that Charles and family have carried out at Hole Farm over the years is very impressive, and thanks to historic maps and photos the beneficial changes to the landscape are clear for all to see. The judges were also impressed by the strong and successful working relationship they have with their contract farmer, which ensures the delivery of high-quality areas within the arable areas for farmland birds and pollinators.

“There are going to be quite significant changes in the future, and this is a case study of what we can do in 30 years. It can be done within a profitable arable operation, and it can be successful.”