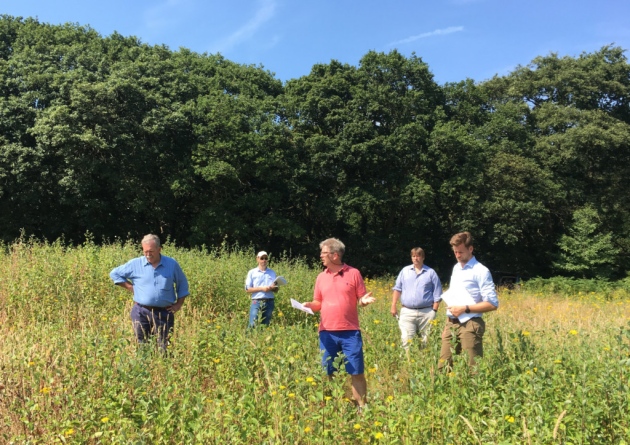 A Norfolk farmer said it was a “great honour” to win a coveted conservation prize – and suggested this competitive edge could also help secure vital grants to continue his work for wildlife after Brexit.

The farm’s 270 hectares includes extensive woodlands, floristically-enhanced margins, pollen and nectar plots, wild birdseed plots and cultivated margins for arable plants – all of which were praised by awards judges for providing food and habitats for a rich abundance of bird and insect life.

Since 2013, many of the farm’s environmental features have been funded under a Higher Level Stewardship (HLS) agreement.

But with uncertainty lingering over what the criteria will be for environmental payments after Britain departs from the EU and the subsidy support of its Common Agricultural Policy, Mr Inglis said an award-winning pedigree could help his farm compete for future grants.

“There is a lot of talk at the moment about being paid on results,” he said. “We are trying to position ourselves by hopefully being one of the best at it so that if it becomes competitive for this money the powers that be will decide we are worth investing in.

“I think that if you can show that you have won these sort of awards, it means you must be hopefully doing it better than some of your competitors.

“I don’t particularly like to describe my farming neighbours as competitiors, but if it does become a competitive world in terms of subsidies then we want to be the ones that potentially can get these grants. I think without grants, and without subsidies, the wildlife on farms like ours would collapse.”

When his family started buying land at Hole Farm in 1982, Mr Inglis said it inherited “a Norfolk prairie farm with almost no trees and no hedges”.

“We set about planting 60 acres of woodland and re-planting 8.5 miles of hedgerows,” he said. “In 2013 we joined HLS (Higher Level Stewardship) which enabled us to soften the boundaries between hedgerows and woodland and provide habitats for bird life and insect life around the farm.

“We have seen an enormous increase in bird life and I have a particular interst in butterflies – we have one or two species that are comparitively rare in the form of white admirals and purple hairstreaks. Their numbers have exploded over the last few years.”

Runners-up for the award were William and Charlie Mack of W Mack and Son, Hempstead Hall, and the other highly commended finalist was Jonny Cole of John Cole Farms, Winfarthing.

Mike Edwards, business manager for Norfolk FWAG, said: “This was one of the strongest years I have ever seen in terms of the applicants. Each of the three finalists showed outstanding commitments to conservation farming, and the judges found the decision very difficult.”