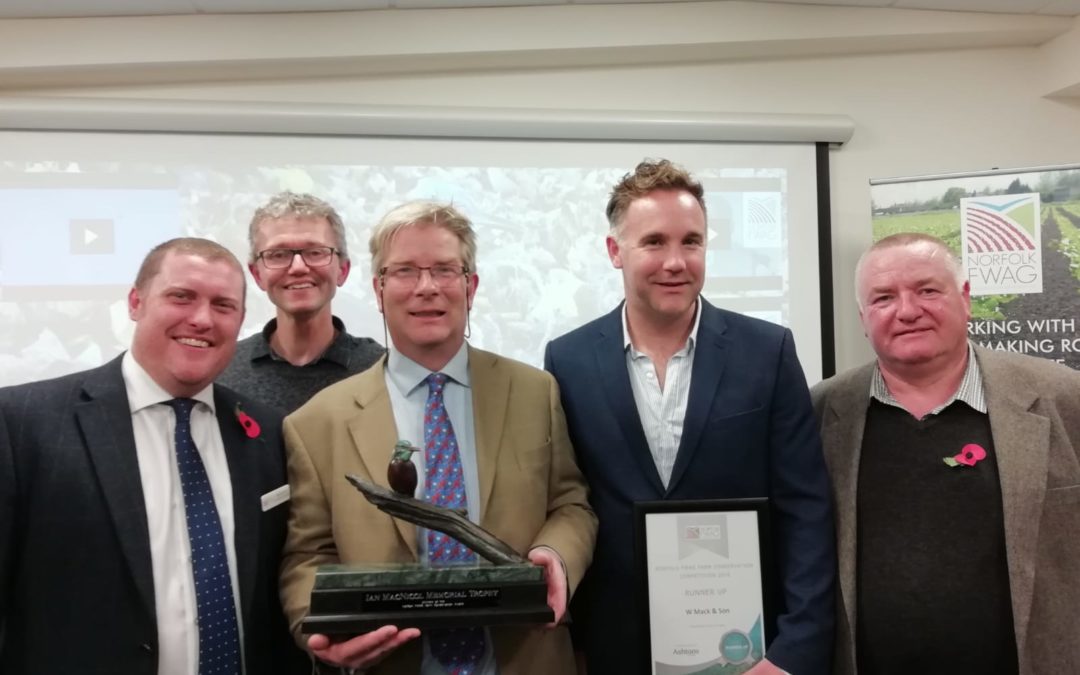 Charles Inglis of Hole Farm, near Edgefield was celebrating last night after being awarded the Norfolk Farming and Wildlife Conservation Award.

Charles was presented with the Ian MacNicol Memorial Trophy at the annual Norfolk FWAG members’ evening on November 8th. This coveted award celebrates the very best of conservation farming in Norfolk and is organised by Norfolk Farming and Wildlife Advisory Group. The trophy is awarded to the farmer whom the judges consider has made an outstanding contribution to nature within their farm business.

The evening was jointly sponsored this year by Ashtons Legal. The generous support enables the FWAG Charity to award the winner and runner-up with high quality framed certificates and to provide refreshments for the 50 attendees.

Central to the presentation evening was a series of short videos which were shot during the judging process. This high quality production by Brian Morris Productions was sponsored this year by Bayer Crop Science.

Attendees enjoyed an update on the work Norfolk FWAG have been involved in over the year, and a look to the future of Nature Conservation on Farmland from Phil Jarvis Head of Farming at the Game and Wildlife Conservation Trust’s Allerton Project. The evening, which was held at the offices of the AF group, then concluded with a feast of locally produced food.

Mike Edwards, who heads up Norfolk FWAG said “this was one of the strongest years I have ever seen in terms of the applicants. Each of the three finalists showed outstanding commitments to conservation farming, and the judges found the decision very difficult”.

Charles farms over 250ha in North Norfolk close to the village of Edgefield. The farm is cropping winter and spring barley, sugar beet and winter wheat. There are extensive areas of land managed for conservation on the arable including floristically enhanced margins, pollen and nectar plots, wild bird seed plots and cultivated margins for rare arable plants. The farm also has extensive areas of established woodland including Edgefield Little Wood SSSI, along with a series of newly planted woods.

The judges were particularly impressed by the effort given to continually striving to improve the results of some of the conservation measures on the arable land including following an arable cultivated margin in the rotation with a conservation headland. The farm has been delivering habitat for farm wildlife through the Stewardship schemes for only 5 years but a huge commitment and difference to the landholding can be demonstrated in this time.

The runner-up is Willian and Charlie Mack of W Mack & Son, Hempstead Hall.

The other highly commended finalist is Jonny Cole of John Cole Farms, Winfarthing.

A video of the winning farm can be found here https://www.youtube.com/watch?v=Sdouo75CPwk&t=1s